The Tripoli-based Central Bank of Libya has denied that its Governor Sadek Kaber has met with the vice president of the Presidency Council, Ahmed Maetig, and the head of the Tripoli-based Audit Bureau to agree on the reform proposals suggested by the Audit Bureau.

The set of economic and financial reforms were proposed by the Audit Bureau head Khaled Shakshak during a television programme last week. They can be summarized as follows:

1-Starting on 03/02/2017 Libya will see a marked improvement in all institutions of the Libyan state.

2-Every Libyan family (through the family book) will be given US$ 2,000 per year at the official CBL exchange rate of LD 1.40 per dollar.

3-This currency distribution process will take place through new e-cards which will be available to all Libyans at any bank.

4-Foreign exchange will also be allocated for all Libyan student studying abroad as well as well as for cases of medical treatment abroad.

5-For food and basic goods a special computer database/system has been prepared and a preliminary bill for most goods has been prepared, and once the procedures are complete, all subsidized food commodities will be imported in time. There will also be an e-card and the ability to book by SMS to avoid congestion by using the National ID number.

6-A tax or levy will be charged evenly on all import companies.

7-The current liquidity/cash crisis at banks will end once all banks impose fees on companies and foreign exchange transfers are granted to all Libyans through the use of the family book. This will end the liquidity crises, giving banks access to liquidity (stashed in people’s homes) estimated at US$ 18 billion.

8-The state budget deficit is US$ 11 billion and once the necessary legal procedures for charging companies is put in place. It will end all Libya’s economic crisis.

9-We have allocated emergency funds for all sectors suffering from near-collapse which will be disbursed at the end of the month.

10-Concerning the oil sector, we will allocate a special budget for the reconstruction of what was destroyed and for the development of the oil sector in order to raise production capacity to the maximum extent, which will enhance the country’s economic and financial situation.

11-With regard to fuel and fuel subsidies: an integrated computer programme/database has been established which will enable fuel to be charged using an e-pre-paid charge card where a specific value is pre-loaded. This will be enough for a citizen for a month at the subsidized price. These prepaid cards will be at points of sale in all municipalities.

12-In the case where citizens use up their monthly subsidized fuel allocations, they will be able to buy fuel at the unsubsidized rate.

13-With regard to the problem of the health sector and the salaries of workers for 2013, 2014, 2015 and 2016: the legal procedures are in order and are awaiting the liquidity from the Central Bank of Libya. This will be after the approval of the 2017 LD 34 billion budget after the 3 February 2017 meeting (between the Audit Bureau, the CBL and the Presidency Council).

The televised economic reform proposal by the Audit Bureau head has caused political reverberations in Libya. Some of the Audit Bureau’s proposals were vague and unclear and some had no political mandate supporting them and were never publicly discussed let alone agreed upon by politicians in public at least.

Other proposals already exist, Libyans are allowed to transfer hard currency to pay for education abroad and health care. But this is capped and is only disbursed once oil revenues are actually realized.

The proposal also caused political reverberations in raising hopes and expectations of a beleaguered Libyan public struggling to survive psychological and physical insecurity as well as inflation, cash shortages, sky-high foreign exchange rates and shortages of basic supplies and necessities.

It is indicative of the political battle in Libya between the various executive branches/technocrats/ bureaucracies which are becoming more politicized. The political proposals by the Audit Bureau also raises the question of who ultimately controls Libya.

It clearly highlights a power vacuum, the weakness and lack of domestic legitimacy and trust enjoyed by the PC/GNA. The Audit Bureau, it must be recalled, is supposed to be an apolitical consultative, oversight and monitoring body. It is part of the civil service and is neither the political executive nor the legislature.

It is not clear, therefore, if the move by the Audit Bureau was a coordinated move designed to put pressure on the CBL to give in to the reforms and send a signal to the public that it was the CBL that was hindering urgently needed reform.

It will be recalled that there is a three-way tension between the Audit Bureau and the CBL, as well as between the CBL and the Faiez Serraj-led Presidency Council/Government of National Accord.

The PC/GNA has been pushing the CBL to devalue the Libyan Dinar against foreign currencies in order to reduce the current black market exchange rate which has been (LD 6.4/dollar) over four times the official exchange rate of LD 1.4 to the dollar.

The CBL is taking what it considers is a financial and monetary decision as opposed to a purely political one. It is of the view that the inflated black market exchange rate is predominantly psychological, as a result of the loss of confidence in the political situation in the country caused by the conflict and fighting between western and eastern Libya.

The CBL believes that first the Libyan politicians must get their act together and unite and impose stability and law and order. Only then does the CBL believe that a raft of economic and financial reforms should be implemented, to include dinar devaluation.

The CBL is, for example, keen that subsidy reform is enacted in the form of cash-for-goods deposited into Libyan citizen’s accounts in order to limit the depletion of the country’s foreign exchange reserves. Successive politicians going back to the Qaddafi era have repeatedly cowered away from what they see as a politically explosive move.

Ultimately, even in Libya’s extraordinary political circumstances, the UN-brokered Libyan Political Agreement which brought in the Serraj PC/GNA nevertheless recognizes the Tobruk-based parliament (the House of Representatives – HoR) as the sole parliament of Libya. Under current operative Libyan law, all matters related to the budget and money disbursements are still the domain of the HoR.

The LPA does give the PC/GNA some ‘‘Temporary Financial’’ measures, but it is very unclear and contestable if this extends to wholesale reform of the financial/monetary system including the controversial subsidy reform. 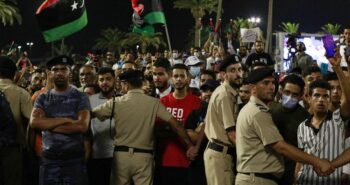 In Libya, anger and uncertainty after polls...