Despite continuing efforts of the Federal Government to evacuate stranded Nigerians from Libya,

efforts which have been on since 2016 with over 2000 Nigerians assisted back home, more Nigerians still throng the North African country, Daily Trust can report.

The International Organization for Migration (IOM), a United Nations humanitarian agency, has been collaborating with the National Emergency Management Agency (NEMA) and other agencies of government to return Nigerians back home.

From 2006 till date, no fewer than 42 trips have been carried out to bring back the stranded thousands of Nigerians, with virtually all of them recounting horrible experiences in Libyan detention facilities.

Most of them spent months and years in detention before help came to them while some died in the process, according to accounts narrated by the returnees.

The latest set of Nigerians evacuated from Libya arrived the Murtala Muhammed International Airport (MMIA) cargo terminal on Thursday with 128 making the trip. Six of them had medical cases with one having three gunshot wounds and was brought out from the airplane with a stretcher.

But the horrible tales have not helped to dissuade   people from embarking on the trip.

An IOM official who spoke with our correspondent, said, “More people are still going to Libya from Nigeria. They embark on the dangerous trip through the desert hoping to cross the Mediterranean Sea to proceed to Europe. I don’t know what they are doing in Libya because the country is battling with its internal security challenges.

There are these militia groups involved in organized crimes against undocumented immigrants. And Libya at the moment is facing disintegration threat. When you say you are going there for greener pastures, can you achieve anything meaningful in that direction?”

But a retired Assistant Controller General of Immigration, Alhaji AbdulMumeen Abdulmalik who spoke to our correspondent said Nigerians would continue to leave the country unless the government tackled the economic recession and lack of jobs.

“People go outside the country to seek economic opportunities that  are lacking here,” Abdulmalik said.

The Zonal Coordinator of NEMA in the South West, Alhaji Sulaiman Yakubu who received the latest returnees on behalf of the Director General, Engr. Mustapha Maihaja, said the agency had stepped up enlightenment campaign on the risk of travelling to Libya.

“We are also telling the youths that the Federal Government has put  in place a lot of initiatives to empower the youths. We have the YouWin programme, we have the N-Power programme and others,” Yakubu said. 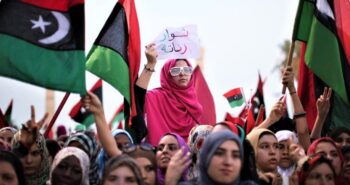 Libya Requires a Constitution that will...