The rise of “super militias,” which last month triggered the worst spasm of violence in the Libyan capital Tripoli in four years, has exposed the weakness of Western efforts to stabilize Libya while creating an opening for the Islamic State to resurrect itself in North Africa.

Since late August, clashes between rival armed groups have shattered Tripoli. Rockets and heavy artillery have destroyed residential neighborhoods, forcing thousands of families to flee their homes. The violence has killed more than 115 and injured hundreds more, pushing the United Nations to declare a state of emergency in the capital.

Another cease-fire was declared Wednesday. But few observers expect the violence to vanish while the militias’ long-standing rivalries and economic ambitions persist. Previous cease-fire agreements have repeatedly broken down.

The recent violence is the starkest evidence yet of how the strategy adopted by the United Nations and Western powers after the ouster and death of Gaddafi during the 2011 Arab Spring revolts has faltered.

That strategy involved installing the Government of National Accord, a U.N.-endorsed interim authority, in 2016 as a way to bring peace and stability to the country.

From the beginning, that government has been largely reliant on heavily armed militias to exert control, and many Libyans have seen it as an authority imposed on them by outside powers.

Today, those militias are battling for the capital. Many of them have linked up with other armed factions to form larger, more-powerful armed groups that some analysts have dubbed “super militias.” Their goal, analysts say, is to assert political control, seize territory and wrest economic spoils, including a share of one of the continent’s largest reserves of oil and natural gas.

“This is the most significant escalation that we’ve seen since the summer of 2014, when you had fighting in Tripoli as well,” said Frederic Wehrey, author of “The Burning Shores: Inside the Battle for the New Libya.” “This is a huge blow to the U.N. action plan and the prospects of an orderly transition from this very flawed Government of National Accord.”

Since the GNA’s establishment, a handful of local militias have grown powerful and wealthy, even as they remain nominally loyal to the government of Prime Minister Fayez Serraj. Today, those militias dominate the government through their control of key ministries and elements of the financial system, as well as by overseeing security in the capital.

“They have grown into criminal networks straddling business, politics, and the administration,” Wolfram Lacher of the German Institute for International and Security Affairs wrote in an April research paper. “The pillaging of state funds — a hallmark of Libya’s political economy — now benefits a narrower group than at any previous point since the 2011 revolution.” Lacher added, “Actors excluded from this arrangement are building alliances to alter the balance of power in Tripoli by force.”

The recent clashes pitted the Seventh Brigade, an armed force from Tarhouna, 45 miles southeast of Tripoli, against two powerful pro-government militias: the Tripoli Revolutionary Brigades and the Nawasi. Smaller armed groups in and around the capital have joined both sides.

The violence was initially sparked by envy and resentment, according to analysts and the militias themselves. Facebook posts by pro-government militia leaders — flaunting their flashy lifestyles, expensive cars and luxury vacations — proved provocative at a time when most Libyans are struggling economically.

On Aug. 26, the Seventh Brigade launched an assault on Tripoli, vowing to cleanse corrupt rivals from Libya.

The violence has raged despite calls by Serraj to end the fighting.

“The GNA has been on life support for a considerable period of time,” said Mary Fitzgerald, a Libya researcher who has focused on the country’s militias. “This current episode underscores its powerlessness, and the fact that it depends on these armed groups more than these armed groups depend on it.” Serraj’s words “simply do not have any effect,” she said.

In 2014, clashes between rival militias engulfed the capital for weeks. As in the latest battles, residential areas were destroyed by heavy artillery and thousands were displaced. The fighting left an opening for the Islamic State to emerge.

By the next year, the militants had seized the coastal city of Sirte and transformed it into the de facto capital of their North African operations.

The extremists were pushed out in December 2016 after militias turned their military might against the Islamic State. But extremist groups remain a threat. In May, for instance, the Islamic State claimed responsibility for an assault by suicide bombers on Libya’s electoral commission in Tripoli, killing at least 12 people, and the group attacked a checkpoint in western Libya in August, killing four.

Most significantly, the Islamic State attacked the Tripoli offices of Libya’s National Oil on Sept. 10 in the midst of the militia clashes, killing two employees and injuring 10 others. It was a sign of the extremists’ willingness to take advantage of a power vacuum.

“This is an ideal breeding ground for ISIS,” Wehrey said, using another name for the Islamic State. “It gives them space. The more these Libyan factions are focused on fighting each other and not containing or battling ISIS, that’s a win for ISIS both in terms of plotting operations but also recruitment.”

The tensions in Tripoli could also embolden Gen. Khalifa Hifter, a military strongman aligned with a separate government in eastern Libya that does not recognize the GNA.

Supported by France, Egypt and other regional powers, Hifter has long vowed to send his forces into Tripoli, though he lacks the military capabilities, analysts say.

Still, the violence plays into the strongman’s argument that Libya needs an authoritarian to bring stability. The chaos in Tripoli “helps him with his narrative, that this model in the east of relative stability through a military-led rule works,” Wehrey said.

The clashes have jeopardized hopes for holding elections at the end of the year. France and the United Nations view them as a vital step toward political stability.

But other European governments such as Italy, as well as many Libyans, see holding a vote as untenable given Libya’s chaotic swings. The violence last month only reinforced that view.

The United Nations’ top envoy for Libya, Ghassan Salamé, recently acknowledged the deep-rooted problems Libya faces, telling European foreign ministers at the U.N. General Assembly meeting in New York that “there is a need to free the government from the control of armed groups.”

Few analysts expect that to happen in the near future. The United Nations, analysts say, did little to push the militias out of government roles over the past two years. Rather, it relied on the militias to provide security for the capital, ministries, embassies and even U.N. facilities.

It continues to do so.

“People were happy with the security the militias provided, despite what they represented,” said Jalel Harchaoui, a Libya scholar at the University of Paris 8. “Now you have a U.N. trying to use very frank language, but it is on the same side of some of the militias. Can the U.N. call itself neutral at this moment? No.”

After the cease-fire, Harchaoui wrote in a tweet Wednesday that the battle for Tripoli will be over only when grievances have been resolved, militias have been defeated and new political arrangements have emerged. None of that has happened, he wrote. “Therefore it’s just a lull.” 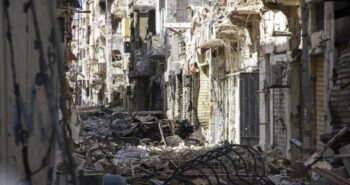 The economic cost of the Libyan conflict (2)

The economic cost of the Libyan conflict (1)