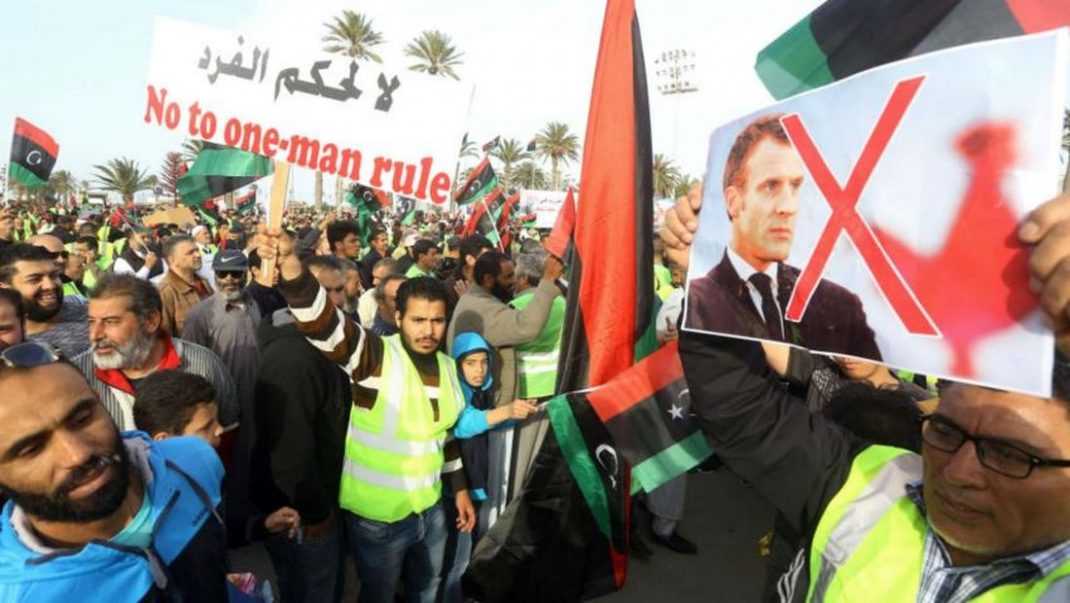 One of the important dynamics shaping Libya’s five-year-old civil war is France’s support for General Khalifa Haftar and his forces in the Libyan National Army (LNA).

Although officials in Paris generally deny backing Haftar, or remain silent on the issue, there is evidence that the eastern commander’s strength is partly attributable to France.

Indeed, since the killing of three French special forces in Libya in July 2016, experts have understood France to be a key player in the North African country’s ongoing crisis that heated up in April with Haftar’s offensive on Tripoli.

One of the consequences of France’s support for Haftar has been an EU that is divided regarding the Libyan civil war.

Libya’s former European colonial ruler, Italy, and other European Union member-states support the UN-recognised Government of National Accord (GNA), which Haftar does not see as legitimate.

Officials in Rome have taken major issue with Paris’ backing of Haftar, which Italy’s leadership sees as severely undermining any lasting hopes for a political solution to the civil war.

Any doubt about the EU’s inability to act collectively vis-à-vis Libya ended after France blocked the bloc from issuing a statement demanding that Haftar halt his westward offensive shortly after the LNA’s assault began.

France and Italy have long competed for influence in the Maghreb. Yet recent developments in Libya have added remarkable tension to Paris-Rome relations, as illustrated by strong statements from Italian officials.

Significant, is that France and Italy’s competition for influence and clashing agendas in Libya are further destabilising the bifurcated North African country.

Despite Libya becoming a major flash-point in French-Italian ties, Paris and Rome ultimately share many interests in Libya’s future.

Neither capital would like to see extremist groups such as Islamic State group (IS) gain a long-term foothold in Libya.

The French and Italian governments would like for a political settlement in Libya to help Europe deal with the arrival of refugees and migrant workers from African and Arab countries.

Unquestionably, energy is part of the picture too, as Libya’s oil wealth also drives both France and Italy’s ambitions in the war-torn country.

Nonetheless, despite these common interests in Libya, France and Italy have extremely different strategies for advancing them.

From an Italian perspective, France’s pro-Haftar policies in Libya have been dangerous and serve to contribute to the Maghrebi country’s fall into further instability.

In January, Italy’s Deputy Prime Minister, Matteo Salvini, was straight-forward when he articulated this view. He argued that France “has no interest in stabilising the situation, probably because it has oil interests that are opposed to those of Italy”.

Those words led to angry French response and a diplomatic row with Paris summoning Italy’s ambassador and demanding an explanation.

For President Emmanuel Macron, Paris’ support for Haftar has been about countering perceived Islamist terror threats and enhancing France’s prestige on the international stage.

Nonetheless, the conventional wisdom in Italy’s government is that Macron’s approach to Libya has been fundamentally flawed and misguided.

Italian authorities see the French leadership being naive about Libya’s complicated realities while relying too much on an unrealistic notion that a military victory can bring peace to Libya.

As argued by Salvini and other Italian figures, France’s support for Haftar relates to its economic and commercial interests in Libya.

With Haftar’s forces controlling virtually all of Libya’s onshore oil reserves, it is common to hear Italian officials allege that the ambitions of France’s energy giant, Total, are at the heart of Paris’ Libya foreign policy.

Haftar is a sworn enemy of the Libyan Muslim Brotherhood and specific ethnic/religious/tribal communities and the eastern commander will simply not prove capable of peacefully uniting the entire country under his rule.

Outside actors trying to help him achieve this end are themselves guilty of contributing to further violence and instability in Libya.

Illustrated by the bloodshed that has beset Libya over the past two months, Haftar has not been greeted in Tripoli as a hero who is liberating the Libyan city from lawless militias, as the eastern commander had hoped.

The anti-LNA resistance is stronger than Haftar had initially anticipated in early Apri.

Now Libyans and those of nearby countries must contend with new realities; Haftar’s assault on Tripoli has triggered new bouts of fighting leaving experts increasingly pessimistic about the possibility of Libya’s opposing sides coming to the table to negotiate for peace.

Given the current set of circumstances, it is easy to imagine both France and Italy suffering from a heightened terrorism threat from Libya, as well mismanagement of migrant arrivals that has been fueling the ascendancy of right-wing xenophobic extremists across Europe in recent years.

How Libya’s civil war will evolve and the extent to which this conflict in North Africa will continue straining the historically strong French-Italian relationship is difficult to predict.

Yet the fighting in Libya is unlikely to end any time soon and it is difficult to imagine Paris and Rome finding themselves on the same page regarding Haftar as the country continues in its downward spiral.

France and Italy’s conflicting agendas in Libya reflect a grander geopolitical picture that is shaped by the absence of the United States as an influential actor in the war-torn country.

It is within the context of Washington lacking a remotely coherent or well-strategised foreign policy in North Africa – particularly in Libya – that France is seeking to assert itself as a rising power on the global stage.

Moreover, Paris’ Libya foreign policy is also about the international agendas of Macron who has worked to strengthen France’s strategic partnerships with Haftar’s two most important Arab sponsors: Egypt and the United Arab Emirates (UAE).

Macron’s administration has worked to counter terrorist groups across France’s former colonies in the Sahel and believes that France’s collaboration with Cairo and Abu Dhabi on this front is essential and must continue as extremist groups spill blood in countries such as Burkina Faso, Mali, and Niger from where they plot attacks against France.

A concern in Rome is that the lack of any resolute US action vis-à-vis Libya has empowered France to act recklessly and pursue dangerous aims under the banner of fighting terrorism.

What Italy would like, is a US administration that can prove capable of pressuring Haftar into halting the LNA’s offensive and negotiate with his enemies in order to reach a peace deal.

Yet with President Donald Trump in the White House, Italy has no reason to expect any such shift in US foreign policy.