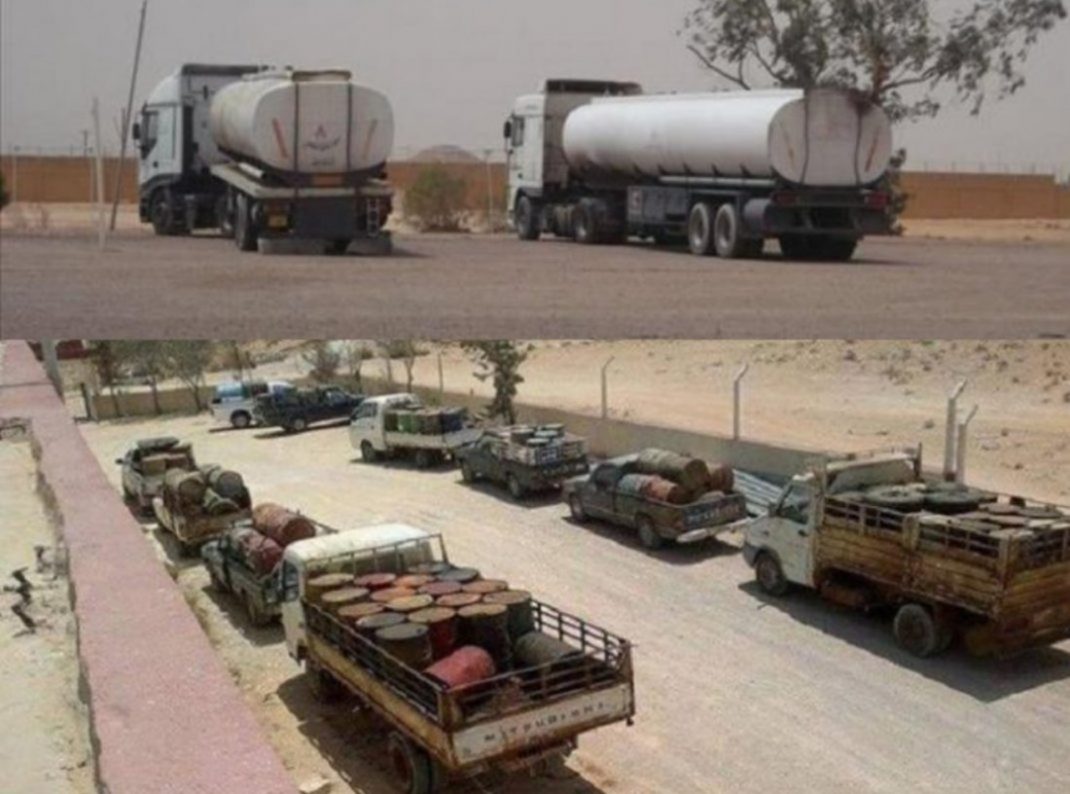 The oil-rich country is supposed to provide cheap, subsidized fuel to its citizens. But amid continuing violence and instability, up to one-third goes missing from official supply chains each year, fuelling a black market that ultimately steals from state coffers at the expense of the population.

In mid-August, as Libyans prepared for Eid al-Adha, temperatures rocketed to over 40 degrees centigrade. In the oppressive heat, many spent hours at petrol stations, hoping to refill their cars and stockpile in the midst of yet another fuel shortage.

Amid ongoing conflict between forces loosely aligned with the UN-backed Government of National Accord and Khalifa Haftar’s Libyan Arab Armed Forces (LAAF), officials blamed one another for the problems with the fuel supply.

But it was nothing new. Such shortages are common, and many Libyans are used to waiting hours at petrol stations.

One Tripoli resident tweeted a Google Earth image, complaining that he could see the fuel queue at his local petrol station from space. Others reported traveling in excess of 100 kilometres to find petrol.

Various strategies have emerged: some stay overnight and choose to wait it out while others leave their car in the queue to return to it later. Many have their reserves at home in case they get caught short. As rumours circulate about potential shortages of fuel, many rush to fill up their cars before supplies are exhausted.

The effect is similar to a run on the banks, with a surge in demand soon exhausting the available supply.

Unable to fill up at petrol stations that offer the official subsidised rate of $0.11 per liter, many end up buying from the black market, where prices can be 15 times higher in some areas of the country, particularly in the south.

As much as one-third of the supply of some fuels – such as petrol and diesel – is believed to be diverted to the black market each year, totaling around 1.3 million tonnes. This is enough petrol to fill 178 Olympic-sized swimming pools. Yet such is the extent of the dysfunction in the fuel sector that no one really knows how much is being diverted.

What we do know is that, while smuggling of Libyan fuel across international borders is longstanding, much of the fuel diverted from the formal distribution network is now being sold within Libya.

This is a change. Rather than profits being made on sales in, say, Tunisia (where fuel is much more expensive), they are increasingly being made inside Libya. And ordinary Libyans are bearing the brunt of the state’s inability to combat vested interests and manage its finances.

The lack of available fuel at petrol stations is often presented as evidence that more supply is needed. At first glance, this makes perfect sense.

Yet the reason for the absence of fuel in a particular area is often because the subsidized fuel earmarked for that area has been diverted and is now being sold on the black market.

In this case, Libyans are not only paying inflated black-market prices, but also ultimately footing the bill for a subsidy that they aren’t receiving.

Despite its oil wealth, Libya has few functioning refineries for the production of fuels. This means that it needs to import around three-quarters of its fuel requirements, mostly from Italy.

Domestic production accounts for the remaining quarter. About half of that domestically-produced fuel is for the domestic market, while the other half goes to state enterprises and major institutional customers.

For example, subsidized fuel is supplied to the state electricity provider to fuel power stations.

Thus, Libya needs a means of estimating its fuel needs, so that it can establish how much fuel it needs to import and how much money should be budgeted for those imports.

But the problem with Libya’s system for estimating demand is that it is paper-based rather than market-based. Demand is calculated based upon the stated requirements of fuel distribution companies and institutional clients.

Statistics from the National Oil Corporation (NOC) indicate that such demand is being manipulated.

The quantity of petrol reported to have been imported to Libya in 2016 was 30 per cent higher than in 2010. But it is hard to see how demand could have increased so significantly in this period – instead, it is likely much of this increase is heading to the black market. And it is being siphoned off at many stages of the supply chain.

Libya’s oil refineries are supposed to be guarded by Petroleum Facilities Guards (PFG) units. But according to the chair of the National Oil Corporation, Mustafa Sanalla, PFGs have ‘descended into local fiefs’.

Libya’s biggest operational refinery, housed in Zawiya’s oil complex, is controlled by the Shuhada Nasr Brigade (Nasr Martyrs Brigade), an armed group formed in 2011 and rebranded as a PFG unit in 2014.

It has been accused of using its control of the refinery to divert fuel to the black market and has frustrated the NOC’s attempts to push it out.

In January 2017, after Sanalla publicly denounced the Nasr Brigade, it did leave the oil complex briefly. Yet within a few days of the group’s departure, protests against the move emerged, suspected of being instigated by the Nasr Brigade.

Gas supplies to a nearby power plant were then mysteriously cut off, causing a blackout across 900 kilometres from the western border with Tunisia to the city of Ajdabiya. Days later, the Nasr Brigade returned.

But, despite this, he remains in post. Some of the Nasr Brigade’s fighters are currently engaged in fighting near Tripoli, opposing the offensive launched by pro-Haftar forces. Kushlaf’s brother, Walid Kushlaf, is accused of being the brains behind the business, dealing with the kingpins of the fuel smuggling sector on the northwest coast.

There are major discrepancies in the records for many local refineries. Libya’s Audit Bureau noted that the value of crude oil supplied to the refineries was approximately $2 billion in 2017, yet the value of the fuel actually received by fuel distribution depots, the next link in the supply chain, was only around $1 billion.

This may be explained by the fact that the remainder is being supplied to institutional clients, but that is not clear.

‘As an official distributor, you face many hurdles when trying to obtain fuel because even at the refinery employees are seeking to make extra money,’ one insider told Chatham House researchers.

‘When the tanker gets to the refinery or depot they ask the driver if the fuel is destined for a fuel station or black market. If it’s for a station they will obstruct the loading.’

Fuel produced in the refineries, along with the imported fuel, is supposed to be transported to state-run fuel depots, from where it will be distributed onwards through the formal network. But fuel depots are also connected with illegal activities.

When Field Marshall Khalifa Haftar’s LAAF deployed troops from the northeast to Sebha in January and consolidated alliances with local armed groups, smuggling routes from depots in the north were disrupted, but only weeks later the flow resumed, as smugglers adapted.

A black-market fuel distributor based in Qatrun, interviewed in March, said Haftar’s forces had not so much stopped fuel theft as co-opted it.

‘Yes, we now need to deal or negotiate with new actors. But they are also the same old actors,’ he said. ‘Except they are now wearing the uniforms of Haftar’s army.’

An LAAF-affiliated group, Battalion 116, took over Sebha fuel depot from another local group that had been implicated in the illegal sale of fuel for years, but traders in the area told Chatham House researchers that modes of operation had not changed.

Large quantities of fuel and cooking gas continue to be sold out of the depot at black-market prices and are diverted to black market fuel stations and gas distributors.

Though the Brega Petroleum Marketing Company, the official distributor, formally denies any allegations of fuel being illegally sold out of Sebha depot, one trader estimated that four in five tanker loads destined for distribution from Sebha to other southern cities end up on the black market.

While it appears on paper that fuel has made it to registered petrol stations, many of those petrol stations either don’t exist or never have any fuel.

‘At the end of [2017], I sent a small team to the west of Libya to investigate fuel smuggling. What they found was that of 105 petrol stations surveyed to which fuel is delivered regularly, 87 of them – 83 per cent – were non-operational,’ said Sanalla, the NOC chair, at Chatham House in January 2018.

‘We suspect they are used by smugglers as fronts.’ (The term ‘smuggling’ is often used in Libya to describe all aspects of the illegal oil trade, even if it stays within the country.)

A UN panel of experts found that more than 480 new petrol stations have been established since 2011 but indicated that most do not exist in reality.

When Sanalla discovered that nearly all of the ‘ghost stations’ were built after 2010, he attempted to restrict the supply of fuel to only those stations built before 2010. Only a few days later, the prime minister’s office had blocked the order as ‘illegal’.

The existence of ‘ghost stations’ on paper means that the owners of those stations, the fuel distribution companies, can officially requisition fuel, and legitimate paperwork can be presented at a fuel depot or refinery to obtain it. But that fuel will then be diverted from the formal distribution network

The Truck Drivers’ Association is the central body that organizes fuel transportation schedules and distributes transport assignments to drivers.

Officially, assignments are distributed in the form of shifts, decided according to criteria including order, region, availability and tanker specifications.

However, controllers and administrators from the Truck Drivers’ Association are allegedly manipulating shift schedules in agreements with militias and armed groups, who protect the process of fuel delivery in exchange for rents from the fuel.

Furthermore, fuel that has reached a legitimate recipient can still end up on the black market. Sometimes, armed groups may requisition fuel as part of their group’s own official supply, filling large tanks within their bases and then selling some on illegally.

In other cases, traders may offer the owners of official stations money to buy their allocations, which they will then sell on at a profit.

Diversion of fuels intended for institutional clients is also a major problem.

In the searing heat of the Libyan summer, electricity power cuts can last over 12 hours a day, and sometimes as many as 18.

Recriminations over electricity supply are a mainstay of everyday conversations. Just like the fuel distribution network, the Libyan electricity grid is creaking under the strain, facing a large number of challenges.

One of these is the diversion of diesel fuel required to power the electricity generating stations. These institutional clients account for roughly 90 percent of the supply of diesel. They also represent a soft target for those who wish to appropriate large amounts of fuel and sell it on the black market.

The rest in part 2

This article draws upon analysis and data collected by Valerie Stocker and Hamam al-Fasi for Chatham House’s project exploring the development of Libya’s conflict economy.

Tim Eaton is a research fellow with Chatham House’s MENA Programme. His research focuses on the political economy of the Libyan conflict.