How Europe can save diplomacy in Libya (2) Europe’s competing policies on Libya have resulted in its mismanagement of the conflict, contributed to an acute crisis in its neighbourhood, and created an image of European incoherence and weakness.

The October 2020 ceasefire agreement, subsequent security talks, and the Libyan Political Dialogue Forum (LPDF) – which created a new road map to elections scheduled for December 2021 – are the product of months of diplomacy by the UN, European countries, and the US.

The agreement was designed to avert a showdown between Turkey, Egypt, and Russia that seemed likely to follow the failed 14-month assault on Tripoli by Field Marshal Khalifa Haftar and his Libyan Arab Armed Forces (LAAF).

That offensive collapsed in spectacular fashion last June, following a Turkish-orchestrated counterattack by forces aligned with Libya’s Government of National Accord (GNA).

The nature of Haftar’s defeat, in which he lost his command and control capability as his forces scattered, stunned the international alliance that backed him – especially given his self-appointed role as the arbiter of political and military affairs in the east and, increasingly, the rest of the country.

In support of Haftar, Russian jets deployed to the central Libyan city of Sirte, 450km east of Tripoli. This allowed Haftar’s forces to regroup there, while Russian mercenaries secured oil installations across the country.

Nonetheless, his military collapse has transformed the dynamics of the conflict. Haftar’s rise formed part of a carefully calibrated project initiated by Abu Dhabi and Cairo in 2013 to install a Libyan version of Egypt’s general-turned-president, Abdel-Fattah al-Sisi.

As the strongman project gathered pace, it gained further international support – most notably from France and Russia.

But Haftar’s dramatic collapse has forced his backers to shift their positions. Rather than seeking total victory, they now share an interest in maintaining a Libyan opposition that divides the country, both to protect their perceived interests and to highlight the domestic rather than international drivers of the conflict – thereby absolving them of responsibility for the crisis. They have taken several different approaches to achieve this end.

Seeking to work around a discredited Haftar, Egypt has encouraged the emergence of Aguileh Saleh – the speaker of Libya’s House of Representatives – as the political head of eastern Libya.

As part of this, Cairo passed in July 2020 legislation to permit the deployment of Egyptian troops in Libya, in a bid to strengthen the position of Saleh, and the Cyrenaican tribes who back him, relative to Haftar and the GNA.

Meanwhile, Russia has pivoted to cultivating former Qaddafi-era elites, while leveraging its influence over the LAAF to control key military and oil installations.

Russia also aims to replace the UN process with a bilateral diplomatic track with Turkey that could shut out Europe and the US, much as it did in Syria.

Only the UAE, with some support from France, appears to be continuing to bank on a Haftar revival as the best hope of countering growing Turkish influence in Libya.

Although he has lost the support of some tribes, Haftar retains the backing of a core of former army personnel, well-equipped brigades headed by his sons and Salafist militias.

The UAE seems to hope that, if it supports this combined force with enough weapons and foreign mercenaries, Haftar will regain his political relevance.

The Turkish-delivered victory over Haftar has also shaken up the dynamics of western Libya, whose power structures are fracturing in a similar fashion to those in the east.

Exploiting the distraction created by the war against Haftar, GNA President Fayez al-Sarraj sought to build up his political base by appointing close confidants to key positions and sacking those who challenged his decisions.

For their part, Turkey’s main partners in the GNA, Defence Minister Salah el-din al-Namroush and Interior Minister Fathi Bashagha, are trying to build up formal security services as a new power base.

Meanwhile, Tripoli’s militia cartels are fighting to maintain control of state resources; revolutionary groups continue to demand retribution for Haftar’s war crimes; and the president of the High State Council, Khaled al-Mishri, is working to secure his own role.

But Sarraj’s position is weakening – as seen when he tried and failed to fire Bashagha to distract from the confused and violent response to protests by Tripoli-based militias last August.

Sarraj responded to the mounting pressure he was under by disingenuously offering to resign if a revived UN political process created a legitimate new government. But, while this bought him some breathing room, it exacerbated internal divisions.

Saleh and Mishri, worried that a new political agreement might displace them, quickly began horse-trading in a bid to control financial institutions and state-owned companies – which essentially hold the keys to state funds.

Russia has since brokered a deal between Haftar and Ahmed Maitiq, deputy prime minister of the GNA, to end Haftar’s oil embargo – which he imposed in January 2020 to demonstrate his supremacy over the GNA, in the build-up to the Berlin Conference that month.

No one else was party to the deal or even agreed that Haftar and Maitiq had the authority to reach the wide-ranging agreement – which sought to lift restrictions on eastern Libyan banks, allowing them to raise new debt and create a new mechanism to govern oil-revenue spending.

But the desperate need for funding stifled objections. Although Libya’s oil exports have resumed, there is no binding agreement on how to divide the revenues from them.

Moscow’s role in paving the way to further economic agreements between eastern and western Libya displayed its growing influence in the country, as did the end of the oil embargo.

But these agreements are only deepening the divide between Tripoli and the east, essentially forcing Tripoli to take on debts accrued by Haftar in attacking the capital without receiving any political concession in exchange.

The emergence of a new political track

This fragmentation across all lines of the conflict, the possibility of a new war around Sirte (which could drag Turkey and Egypt into a direct confrontation with each other), and Russian entrenchment in Libya have had one positive effect: they have re-energised a moribund diplomatic process, reinvigorating the UN-led track.

The renewed focus on the UN process was also boosted by the sudden emergence of nationwide protests. In late August, Libyans took to the streets across the country – on both sides of the east-west divide – to express their frustration with state failure and the corrupt political elite.

The resulting UN track has been based around a multilayered process that, in principle, seeks to build a unified political and security establishment, while also demilitarising Sirte to reduce the risk of international conflict.

The process has sought to co-opt influential external states such as Turkey and Egypt, and to isolate those that depend on conflict to strengthen their position, such as Russia. (The latter outcome has particular appeal for the US, which has recently become more engaged with the process.)

This combination of local and international pressure created a sense among Libya’s political elite that a new settlement was coming, forcing them and their international backers to consider how to engage with the new negotiating framework.

The Joint Military Commission (JMC), a UN-created body that brings together five officers each from the GNA’s military apparatus and the LAAF, is the initial vehicle for negotiations on security issues.

The commission forged the October 2020 ceasefire agreement by focusing on areas in which there was room for a consensus – such as high-level principles – before initiating confidence-building exercises and exploring steps to demilitarise Sirte.

Tarek Megerisi is a policy fellow with the Middle East and North Africa programme at the European Council on Foreign Relations. He has worked on Libya’s transition since 2012 in a variety of capacities.

The economic cost of the Libyan conflict (2) 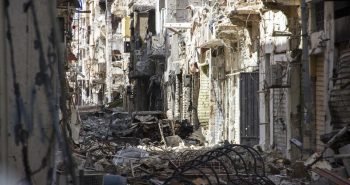 The economic cost of the Libyan conflict (1) 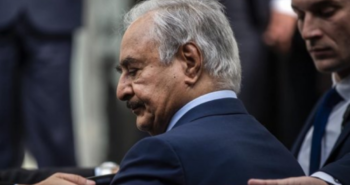