Libya needs 5G and 5G is ready for Libya

Speaking today exclusively to Libya Herald at the Taqnya ICT 2021 exhibition (Tripoli, 9-12 November), Ericsson Libya Country Manager, Andrea Missori said Libya has an important need to close the gap on fixed broadband and fiber deployment and mobile technology can work as an accelerator.

He explained that 4G technology had created a change in behaviour of people in Libya and enshrined the culture of using internet on their smart phones. With the average age of the Libyan being at 28 years old, everyone is already using apps, and, in this way, Libya is ahead of the pack, he added.

Libya ahead of world average in data consumption

Data consumption in Libya is way ahead of the neighbouring countries as well as different European countries. The average Libyan purchases about 15 gigabytes (GB) per month whereas the world average is about 10 GB/month. This is partly because the consumer has no alternatives, he explained.

People access to media and broadcast mainly from their mobile as well as play games on the smartphones. Gaming needs high quantity of data and youths are ready to spend their money with mobile gaming.

5G will be massive 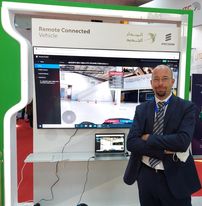 When 5G is launched it will have a massive impact. Ericsson forecasts more than half a billion 5G subscriptions worldwide by the end of 2021, which translates to about 1 million new 5G subscribers per day. This is way ahead of what 3G or 4G had achieved.

Currently South Korea is in the lead with with 24% of its population already using 5G services, with all mobile Operators leveraging on Ericsson technology. Ericsson has 145 5G commercial agreements signed across the world with 97 live networks in 45 countries, including China, U.S., Germany, Japan, UK, Italy, Australia.

In Libya Ericsson expects good opportunities also with the 5G for Industries in the oil, steel production and harbours sectors. 5G is a secure-by-design technology ready to enable the Digital Transformation of the Industries.

Al-Madar is ready to rollout 5G

Al-Madar has presented its 5G service in Taqnya, powered by Ericsson, over the existing commercial 4G network and it is ready for a nationwide rollout. This will mean a superior service to consumers, government and industry.

He highlighted the fact that Ericsson has been present in Libya continuously since 1968. ‘‘We never left! Our office is up and running ready to support our partners and their networks. We operate with a Libyan workforce, and we are investing in them and the country. As we continue to build competencies.’’

And together with the state holding telecoms company, LPTIC, we run the ‘‘connect to learn’’ initiative with universities as part of our Corporate Social Responsibility to groom local competencies and help creating the next ICT generation in Libya.

Prime Minister Aldabaiba was critical of the state telecoms sector at the opening of the Taqnya 2021 ICT expo today, saying it needs to be opened up to competition (Photo: GNU).

Criticising the sector for poor services and high prices, the PM said in the time his government has remaining in office it will seek to increase competition by privatizing the sector. He said this was necessary and that foreign competitors would be let into the sector.

He said the state-dominated monopoly would struggle if some leading private companies are allowed to enter and compete. He said Libyans need to own the sector and that it should be offered up on the stock market.

Prices are too high, and services are poor

Speaking directly to Mohamed Ben Ayad, the new chairman of the state monopoly telecoms holding company, the LPTIC, Aldabaiba said that telecoms prices in Libya were too high when compared to neighbouring countries. This was especially the case since people were now glued to their mobile sets and constantly using them.

He also complained that the services being provided by the sector were too basic and not on the same level commonly found in the rest of the world.

Turning to the state Libya Post Company, Aldabaiba said the company should be delivering post as it used to decades ago. He said with new technology it was now easier and cheaper to establish a post code/zoning system to enable postal delivery.

The surreal scene in Libya

Will the Libyan elections lead to calm or...