New Libyan govt can only be declared after vote, former UN envoy says

Anew government in Libya can only be declared after holding elections and with the will of the people, former United Nations Special Envoy Jan Kubis said amid a political impasse that threatens to drag the North African nation back into armed conflict.

“From my perspective, there is only one government in Libya, that is the government led by Mr. Dbeibah,” Kubis told Daily Sabah in an exclusive interview.

“That is the government that was internationally recognized, that took part in many international events and meetings and that was endorsed and obliged to do something for the country at different conferences including the Paris conference,” Kubis underlined.

Libya has been pulled apart again, with two rival governments claiming power after tentative steps toward unity in the past year, following a decade of civil war.

“All the participants at the Paris conference were very clear – a new government will come after elections in the country and will be the result of a legitimate process,” Kubis highlighted.

“That is the line that I take, as endorsed by the whole international community, including the United Nations, European Union, including leading countries and including Turkey, which was there,” he explained.

The Paris International Conference for Libya, held in November 2021, underlined the need for “free, fair, inclusive and credible presidential and parliamentary elections” while reaffirming continued commitment to work with the Government of National Unity (GNU).

The lawmakers there claimed the mandate of interim Prime Minister Abdul Hamid Mohammed Dbeibah, who is based in Tripoli, expired when the election failed to take place as planned in December.

Dbeibah, however, remained defiant against replacing his government, despite the resignations of a handful of ministers and the handover of government buildings in the southern and eastern regions to Bashagha’s government.

Over the past few months, divisions among Libyan factions deepened, with militias mobilizing – especially in the western region. That has raised fears fighting could return after more than a year and a half of relative calm.

The presidential vote was originally planned for Dec. 24 but was postponed over disputes between rival factions on laws governing the elections and controversial presidential hopefuls. That was a major blow to international efforts to end a decade of chaos.

“The Paris conference that represented a consensus of the international community at least at that point of time – and I think it is still valid – was very clear – only after elections there will be a new government,” he urged.

He indicated that all other arguments and speculations have no other utility than bringing chaos, confrontation and no solution.

Saying that there are still some discussions about how to improve the legal and constitutional basis ahead of holding elections, Kubis said that elections are a must and should not be delayed further.

The oil-rich North African country has been wracked by conflict since the NATO-backed uprising toppled and killed longtime dictator Moammar Gadhafi in 2011. The country has for years been split between rival administrations in the east and west.

Turkey, in an obvious show of support for Dbeibah, invited the prime minister last month to the Antalya Diplomacy Forum, whereas Bashagha was not present. Being asked whether Bashagha was invited by Turkey, diplomatic sources did not comment but underlined that Turkey also has close ties with the former interior minister.

“My relationship with Turkey is strong and we have a very solid friendship. Our relations with the Turkish state have never been affected,” Bashagha told local Alwasat TV last month.

A deal on state spending can kickstart... 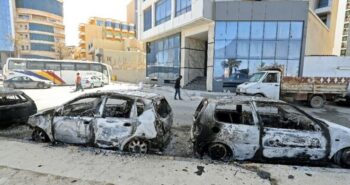