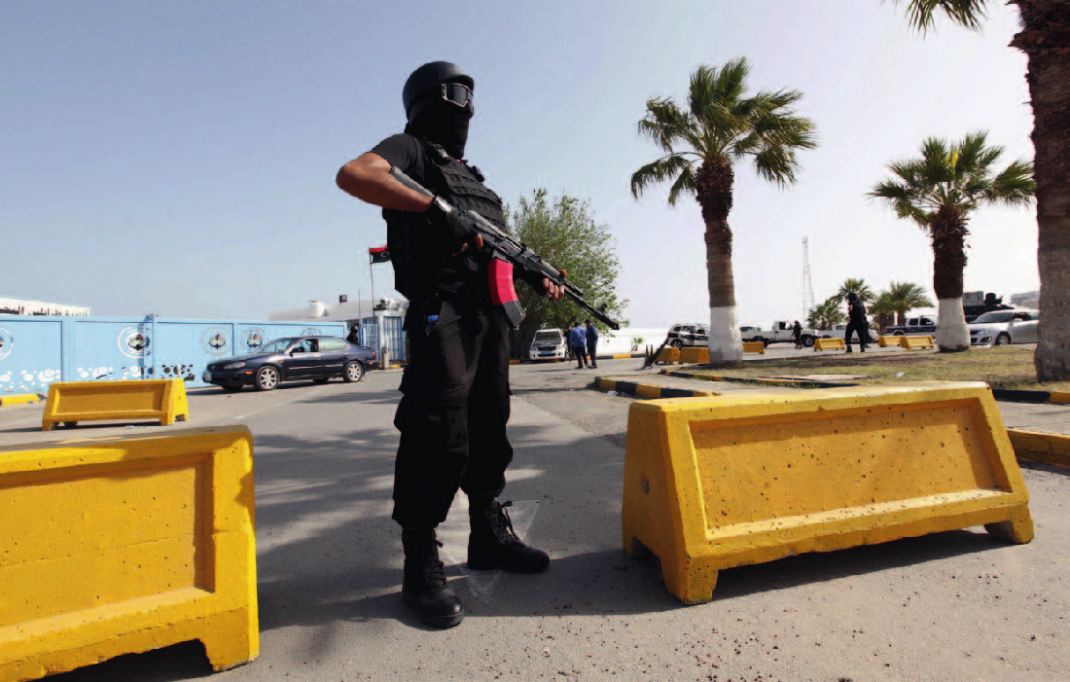 By Wolfram Lacher and Alaa al-Idrissi

This Paper examines the rise of a militia cartel in Tripoli, and concludes that the situation is untenable, as it risks provoking a major new conflict over Tripoli fought by those who have been excluded from access to the state and impedes efforts to establish a meaningful unity government.

Since early 2017, this consolidation has established the basis for a functioning cartel. Although tensions between the four factions do exist, they have shown solidarity when their territorial control has been challenged by other armed groups.

Within areas under their control, the four militias have, to an unprecedented extent, tightened their grip over economic assets and state institutions (see Map 3). While this evolution has improved security for the average citizen, it has also impeded a growing range of powerful forces that seek to access the levers of the state administration and its associated economic resources.

The armed groups that dominate the capital in 2018 have expanded in inverse proportion to the state budgets allocated to them, which have contracted. Security officials and commanders affirm that the funds groups such as the Special Deterrence Force or Nawasi receive from the interior ministry cannot explain their rapid expansion since 2016.

All four of the capital’s largest militias—most notably the SDF—have recruited among the former regime’s intelligence officers, acquired expensive new equipment, and extensively integrated foot soldiers in the areas they have taken over.

Changes in armed groups’ financing patterns are key to understanding the territorial expansion of Tripolitanian militias, along with their proliferating roles. The profits armed groups made from controlling banks during deepening crisis were particularly important. To a certain extent, their expansion sustained itself, as seizing control over new bank branches provided greater access to resources.

Moreover, as the armed groups infiltrated the administration and the banking sector, they became ever more deeply enmeshed with business and political networks. In the words of one former SDF commander, who is critical of these developments:

A given militia now acts as an intelligence service, a state security force, a private security company, and a service provider to ordinary people, all at the same time. When your competencies no longer have limits, we have a problem.

The decline of state funding

In the boom era of Libya’s post-revolutionary armed groups, from 2012 to early 2014, the primary source of finance was funds specifically allocated to these groups via the defence and interior ministries, as well as the army—including through umbrella institutions such as the Supreme Security Committee (SSC) or the Libya Shield Forces (LSF).

Not only did these funds cover the salaries of individual militiamen; more importantly, by vastly inflating payrolls and operating expenditures, they allowed militia leaders and their political allies to accumulate wealth, which was then partially reinvested into heavy weapons and other capital-intensive equipment (Lacher and Cole, 2014).

The schism of state institutions in mid-2014 disrupted the arrangements that underpinned this mode of financing. The Central Bank blocked demands for new budgets from groups on both sides of the divide. While the Bank initially continued to pay salaries on the basis of existing payrolls, these were gradually scaled down during 2015–16, as a national ID number was introduced with the intention of reducing the duplication of salary payments to the same individuals.

This further diminished the resources available to armed groups. Schemes used by officials in the Hassi and Ghwell governments to appropriate unspent budgeted funds or state-owned enterprises could only compensate for a fraction of the losses armed groups incurred through these developments.

As state funding contracted, armed groups searched for other ways to finance themselves. Kidnappings soared in Tripoli during 2015 and 2016, with the vast majority being financially motivated.

During the same period, ‘protection rackets’ emerged, with armed groups ‘taxing’ local markets or businesses in exchange for ‘security’.

Over time, these rackets have become institutionalized: in the Abu Slim district, for example, the municipal council taxes market traders and businesses with the ‘returns’ being reinvested in public works.

Local residents say that such taxation is enforced by Kikli, who has close ties with the municipal council and ultimately controls tax revenues and their distribution.

Brigade 301—whose leaders came from Misrata’s Halbus Brigade but whose membership is largely non-Misratan—operates in the Al-Karimiya market in south-western Tripoli. It taxes each of the market’s parcels at an amount of LD 100 per month, which adds up to a monthly revenue of between LD 500,000 and LD 750,000 (USD 364,000–546,000 at the official exchange rate).

The members of the unit who patrol the market receive part of these funds as an incentive, which supplements their defence ministry salaries. It is now standard practice for major state institutions or state-owned facilities, including office towers in central Tripoli or the National Oil Corporation (NOC), to remunerate the armed groups that control the areas surrounding their facilities.

From late 2014 onwards, armed groups in Tripoli seized opportunities emerging from the widening gap between the official and black market exchange rates as well as the worsening cash shortages in banks. In both cases, the actions of armed groups significantly deepened the crisis they exploited.

The root causes of these crises lay first and foremost in the collapse of oil export revenues from 2013 and the division of state institutions between two rival governments since 2014. Both developments eroded trust in Libya’s currency, the dinar (Harchaoui, 2018).

Growing inflation discouraged people from keeping their money in banks. This predisposition was exacerbated by measures that tightened access to hard currency at the official exchange rate for imports, as well as widespread suspicions that bank employees were colluding with kidnapping gangs.

As the black market exchange rate diverged from the official rate, opportunities for fraudulent schemes increased. Well-connected businessmen obtained hard currency at the official rate by acquiring letters of credit (LCs) for imports, then imported less than they declared—or even nothing at all—before exchanging their foreign currency against dinars on the black market.

They thereby depleted Libya’s foreign exchange reserves and further accelerated the dinar’s downward spiral, which in turn made fraud even more lucrative. Credit cards issued by Libyan banks also offered opportunities for profiting from the gap between the official and the black market rates, albeit on a smaller scale (Zway, 2017, pp. 18–23; Eaton, 2018, pp. 21, 27–28).

The deepening currency and cash crises caused Tripoli’s armed groups to become more deeply involved in the banking sector and this in turn further exacerbated these crises.

Armed groups began competing over the physical control of banks—that is, over the ability to threaten bank employees and protect them from the threats of others—in order to profit from credit card schemes and extort letters of credit from bank officials. These rivalries also framed struggles between armed groups that supported and opposed the Presidency Council.

As tensions over access to cash increased, banks sought protection from armed groups to manage cash distribution. Armed groups profit directly and indirectly from their new relationship with bank branches.

The branches pay the groups ‘guarding’ the branches monthly fees, supplementing the salaries those same militiamen receive from the interior ministry or the army.

Control over the distribution of cash at banks has also placed armed groups in a wholly new position of power and economic privilege. While ordinary citizens face major difficulties accessing their salaries and savings, members of armed groups are able to withdraw their salaries in cash as soon as banknotes arrive at banks.

Armed groups also profit from the use of cheques, which is increasingly widespread as the liquidity crisis has deepened. To exchange their cheques for desperately needed cash, Tripolitanians will accept a discount of around 20 per cent of the stated value.

Leaders of armed groups that control bank branches buy the cheques at a discount and can then covert them into cash at their full value. The aggregate effect of these practices has exacerbated cash shortages for the average citizen. At the same time, commanders can offer preferential access to cash, thereby establishing themselves as patrons of client list networks.

The profits to be made through the control of access to cash, however, pale in comparison to those derived from fraudulent schemes involving letters of credit. The branches of commercial banks are key cogs in the bureaucracy governing the award of LCs to access foreign currency at the official rate.

From early 2015 onwards, the Central Bank reduced the amount of foreign currency available for LCs and progressively tightened oversight. In 2015 and 2016, armed groups in Tripoli became renowned for using brute force, including kidnapping bank branch managers and Central Bank officials, to obtain LCs for front companies or accomplices.

Since then, further administrative layers have been added to the approval process for LCs. After the Presidency Council appointed an economy minister in April 2017, he established another committee that approved or rejected demands for LCs, though the Central Bank retains final authority (Sada, 2017).

The Audit Bureau has also increased surveillance of LCs, and its interventions caused hundreds of such letters to be suspended during 2016 and 2017. Obtaining LCs for fraudulent purposes thus required increasing coordination across and within different institutions.

This has driven the formation of criminal networks that operate at the intersection of the administration, political actors, influential businessmen, and armed groups. When coordination fails, armed groups adopt more coercive means.

In one case, a Nawasi Battalion leader known as ‘Sunduq’ (‘Treasury’), whose influence extends over an area that includes the Bulaila office tower and the headquarters of the Central Bank, paid an unannounced visit to the Audit Bureau while accompanied by a bank branch manager.

During his visit, he engaged the chairman and demanded that the Bureau lift its suspension of LCs for companies linked to the Nawasi. An altercation with the Bureau’s security personnel resulted in the temporary abduction of the Bureau’s head of security by the Nawasi. (The Lcs remained suspended.) Criminals have

also abducted and held senior Central Bank officials, including the chief operating officer and the governor’s office director. Despite these pressures, the governor claims that the Central Bank has not yielded to extortion.

The actors that engage in these practices are not simply armed groups using brute force. Rather, their operations are sustained through complex webs of complicity, mutual benefit, and coercion.

Some commanders claim—not implausibly—that branch managers were not always victims in such schemes and had actually approached them to collude in LC fraud. Powerful businessmen across Tripoli associate with particular armed groups to gain access to LCs and then, in return, reinvest a share of the profits into these same groups.

Such networks have been central to the emergence of the militia cartel in Tripoli. The knowledge and connections of influential businessmen and political operators gave Tripoli’s militias access to the resources they needed to expand across the capital.

Wolfram Lacher is a Senior Associate at the German Institute for International and Security Affairs (SWP) in Berlin. He has worked on and conducted research in Libya since 2007, including in a previous capacity as an analyst at a business risk consultancy, from 2007 to 2010.

Alaa al-Idrissi was an official at an interior ministry institution in Tripoli from 2012–14. He is active in mediating and resolving conflicts between armed groups in Tripoli.