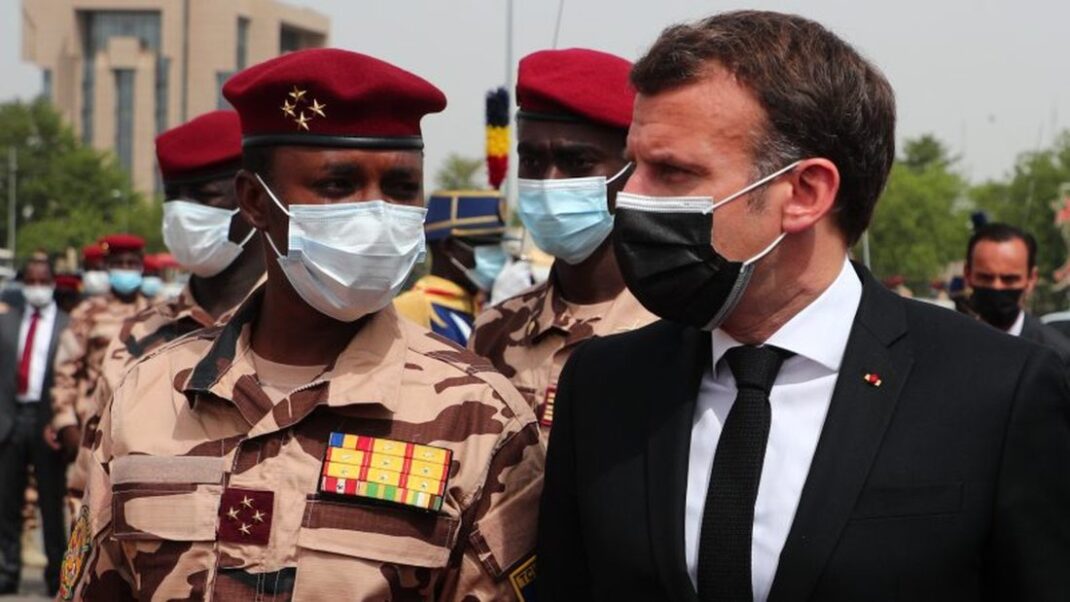 France, the Military, and Strongman Politics in Chad

Debating Ideas is a new section that aims to reflect the values and editorial ethos of the African Arguments book series, publishing engaged, often radical, scholarship, original and activist writing from within the African continent and beyond.

It will offer debates and engagements, contexts and controversies, and reviews and responses flowing from the African Arguments books.

On April 19th, Idriss Déby, President of Chad, died on the battlefield. Since his death, this “brave friend” of France has been praised for his military qualities. He liked to cast himself as a warrior. In 2008, threatened by a rebellion, he had already announced that he was ready to die in battle.

In August 2020, he was awarded the title of Marshal. This engineering of his own warrior persona was aimed at Chadians and at his brothers (and his enemies) in arms – but also at those international actors who had viewed him as an ally in the “war on terror”.

Yet this alliance predates that “war”. Idriss Déby already had the support of the French back in 1990, when he overthrew Hissène Habré. He was also quietly but effectively supported by the French army during rebel attacks on the capital in 2006 and 2008.

And in February 2019 the French army went further still, carrying out air strikes against a rebel column. The military cooperation agreement concluded between the two countries in 1976 has always been interpreted broadly.

Behind this attachment to Idriss Déby lie certain interests, and those interests are military, rather than economic. Chad, which has almost continuously hosted a succession of military operations ever since independence, is considered a strategic area.

This policy is underpinned by an ideology: that of the strongman; the only man capable of taming a country of warriors. An ideology that is problematic in more than one respect. It is paternalistic: the French see themselves as being better able to judge than the Chadians themselves what political system would suit them.

It is culturalist and racist: Chadians are seen as a turbulent people who should be told what to do –rather than governed. And it is sexist: only a man can do

Idriss Déby was never a puppet of the French; more than once he stood up to those supporting him. He was a fine strategist, capable of both bluffing and manipulating his own unpredictability to impose himself on the regional arena and among his Western supporters.

The fact remains that Idriss Déby’s political journey was enabled by his allies, who not only deliberately turned a blind eye to the violent elimination of its most threatening opponents (whether civilian or military) at the risk of significant collateral damage,but also accepted fraudulent elections.

The dominant discourse at that time was: “Idriss Déby is no great democrat, but there is no one else to ensure the stability of the country”.

It was as though the strongman of Chad was invincible and immortal. Proponents of this discourse were not, however, unaware of the fragilities of the system that Idriss Déby had put in place: a weakly institutionalised political system based on the politicisation of ethnicity, unstable alliances, and a mix of repression and co-optation.

The circumstances of Idriss Déby’s death were unforeseeable, but the consequences of his disappearance were not.

The same blindness is characteristic of how the Chadian army has become an indispensable ally in the “war on terror. In 2013, the Chadian army fought alongside the French army in the context of Operation Serval in Mali.

It is currently deployed against jihadist armed groups in the Sahel and Sahara. The Chadian contingent is the second largest in the United Nations Mission in Mali (MINUSMA). The army is also mobilised in the Lake Chad basin, against the armed group Boko Haram.

It is true that the Chadian army is both better trained and more combative than other armies in the region. But France and the United States, which set up military assistance programmes, must have known they were playing with fire.

The army, hailed for its prowess in the field, is also guilty of atrocities against civilians in Chad and in countries it has intervened in –the Central African Republic in particular. In the latest episode, Chadian soldiers have committed rape in Niger.

For years now, political and social actors in Chad have been demanding reform of the army and an end to impunity.

These actors have not been heard, and now risk paying the price for the coup that has immediately followed Idriss Déby’s death: a group of officers led by one of his sons, Mahamat Idriss Déby, has set up a Military Transitional Council and announced the dissolution of both the government and the National Assembly.

The authority of the man positioning himself as the country’s new strongman is already contested, especially within army ranks. The international policies pursued in the name of stability in Chad and the region are not unrelated to the forthcoming disorder.

Marielle Debos is Associate Professor in Political Science, University of Paris-Nanterre, and a researcher at the Institute for Social Sciences of Politics (ISP).

It’s Back to Square One in Libya